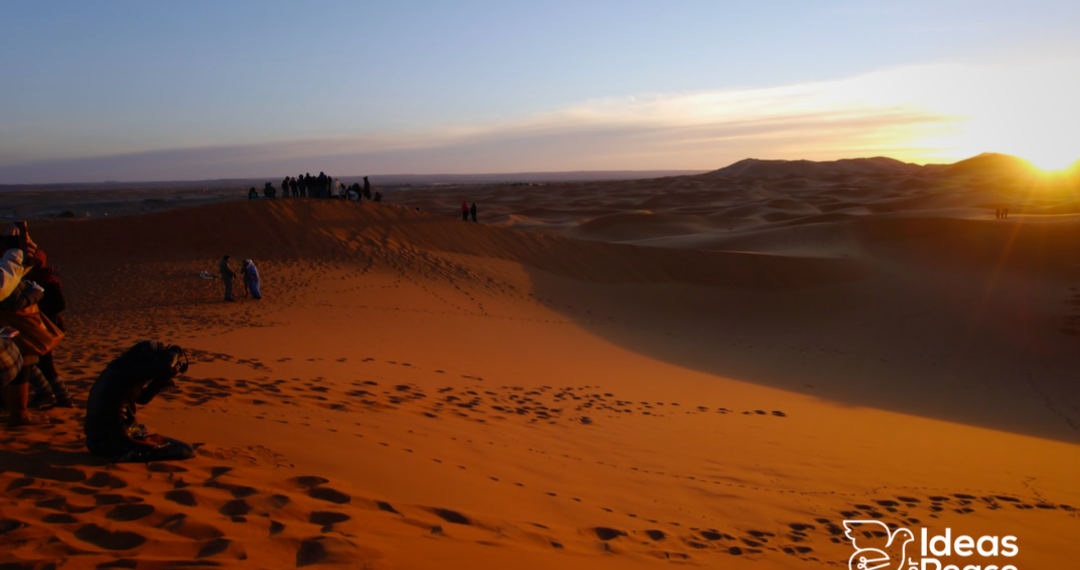 Much of Africa was born into conflict due to hasty and problematic decolonization mandates that were undertaken by colonial powers in response to growing pressure from the UN and a large part of the civilized world. Apart from leaving questions about local administration unanswered, colonial powers often neglected the varying interests of local ethnic groups; something that led to violence and instability.

A case study of colonial mismanagement, self-determination, military occupation, and resource exploitation can be found in the occupied Western Sahara region. A large part of the region was under Spanish control since the late 19th century and Western Sahara, in particular, was used as a center for the slave trade.

The region of Western Sahara is populated by an ethnic group called the Sahrawi. The people have been fighting for the right to self-determination and independence since the early days of Spanish rule and have been met with brutal repression, first from the ruling Spaniards and then from their Moroccan occupiers.

Their right to self-determination has been recognized by the International Court of Justice in an advisory opinion, something Morocco rejected and responded to by coordinating one of the largest transfers of civilians in African history (Green March). The latter was later legitimized by the Spanish ruling authority with a tripartite agreement called the Madrid Accords. Since then, Western Sahara (or the Sahrawi Arab Democratic Republic) has seen brutal occupation, pillaging, and flagrant violations of human rights.

This conflict is incredibly complex. Multiple UN missions, third-party mediated peace talks and over forty years of protracted conflict have failed to reach an amicable solution. Given that, this paper will focus on two key aspects of the conflict: the exploitation of natural resources and self-determination.

Unfortunately for the Sahrawi people, the colonial legacy of exploitation did not end with Spain’s withdrawal in 1975. Like most conflicts in the global south, natural resources are at the core of the Western Sahara conflict. The resources in question include phosphate reserves and fisheries, among other resources that belong to the Sahrawi people because permanent sovereignty over resources should be an extension of self-determination.

The application of the principle of permanent sovereignty to the natural resources in a non-self-governing territory allows for economic activity, including the development of those resources, as long as this activity or exploitation is done to the benefit of the people living in the territory, after consultation and coordination with their representatives (Cherif, 2018).

However, it isn’t enough to establish that natural resources belonging to the Sahrawi people are being exploited. An examination of the purpose this exploitation serves in the context of Morocco’s occupation and the parties that benefit from this becomes necessary to understand the scope of the situation.

As is evident with the Green March, Morocco’s intentions went beyond simply owning the territory of Western Sahara and involved populating it with their own people. This led to the sponsoring of civilian settlements in the occupied territory, something that has been compared to Israeli settlements in occupied Palestine.

Exploitation became crucial after 1975 to create an economy for the settlers, something they did very successfully, with an estimated 5.65 billion US dollars of resources to work with (Smith,2015). The fact that resources belonging to an indigenous group are being used to enrich their occupiers is not an anomaly by any means but the scale and beneficiaries of this case are what make it interesting.

The parties that are most directly involved in this illegal exploitation are Morocco and the EU. The EU has signed several lucrative deals with Morocco that, in practice, grant them the right to exploit fisheries off the coast of Western Sahara (Smith, 2015)

The aforementioned benefits are also conferred to private actors that act with little oversight and regulation. A lot of private companies that engage in resource extraction are often awarded these contracts by their home country, something that raises the question of liability in the event of an illegal act.

The characterization of this exploitation is paramount because it allows individuals, corporations, and even countries to be held accountable for their actions. Some argue that these actions constitute pillaging (Smith, 2011): a concept that has been explored by the International Court of Justice in the Uganda vs Congo case, and others believe that responsible parties should face civil consequences. Another school of thought suggests that States should refrain from enabling the suppression of self-determination altogether, something that was first introduced by the ICJ in 2004. While the legal question of liability is a crucial one, states should attempt to prevent abuses, to begin with. A few examples include:

Self Determination of the Sahrawi people

Self-determination has existed as a philosophical idea ever since democracy was recognized as the most inclusive way to organize our social and political life. At its core, self-determination guarantees every individual’s pursuit of independence and the right to have their political ambitions realized.

This principle also extends to groups of people who want the freedom to decide their own future without external compulsion and has gained recognition in the international community as an inalienable right and is also a widely accepted part of customary international law. The fight for self-determination is a universal struggle for identity and is being fought for in Palestine, Kurdistan and several states in Post-Soviet Europe.

In the context of the Sahrawi people, the struggle is still ongoing. There exists little ambiguity as to whether the Sahrawi people have a legitimate claim to the land and the right to self-determination, thanks to an ICJ opinion rendered in 1975. Although they have the right on paper, plans to conduct a referendum in the region never materialized due to discrepancies in the voting list and other political obstacles.

The latter is largely a product of Moroccan resistance to the idea of Saharawi independence. They believe that any solution to the conflict should integrate Western Sahara into Morocco or give the former partial autonomy. If granted autonomy, the people will supposedly be able to manage their own affairs but will have to look to Morocco for defence and foreign policy.

This proposed solution is based on the nationalist idea of a united Morocco and has been criticized by the Polisario front (the political representatives of the Sahrawi people) with a statement from their leader reading “The Moroccan autonomy project is contrary to the principle of self-determination”. Morocco and its allies claim that restricting the options of the people to prevent their independence is a matter of practicality.

Here we see that Morocco is unable to justify their occupation on a purely principled basis and have resorted to claiming that an independent Western Sahara would not survive. An independent Western Sahara would undoubtedly have problems getting off the ground but is that fact sufficient to justify their continued oppression? Can Morocco and its allies really argue against the proposed state’s economic viability after illegally exploiting their natural resources?

The idea that the Sahrawi people may end up voting against their interests can set a dangerous precedent and can enable States to deny self-determination on arbitrary grounds. This paper cannot promise that an independent Sahara will be economically prosperous or that the current de facto administration is the best possible representative of the Sahrawi people, however, it is difficult to argue that their current situation is a better alternative for us to accept than the possibility of their independence.

This paper seeks to inform the reader about two key aspects of the Western Sahara conflict and help explain the more obscure elements of this relatively unheard struggle. The struggle for liberation is one that we can all empathize with and with this paper, the author hopes to draw the reader’s attention to a worthy cause. While the paper and general coverage of this conflict can paint a bleak picture of the situation, it isn’t hopeless. There are several civil society organizations, human rights groups, journalists, and activists that are doing tremendous work to amplify the voices of the oppressed. This paper is a small contribution to a library of dedicated work.

Smith, J. J. (2011). The plundering of the Sahara: Corporate criminal and civil liability for the taking of natural resources from Western Sahara. Editorial Comment.

Mihir is an aspiring student of conflict studies hailing from India. He is an avid debater and public speaker with a keen interest in public policy and international relations. He has won numerous Model UN’s, international debate competitions and public policy events. Mihir also enjoys playing chess and reading in his free time.