Education is a bridge which connects human ability to abstract concepts

Originally Published at Peace and Conflict Monitor on: 12/04/2007

First of all,
look at the handwriting of my former student in Mongolia. 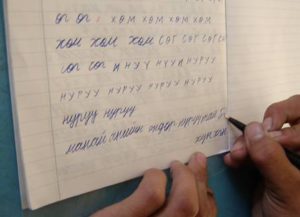 What surprised
me was that this writer was not able to read his own handwriting!! What happen to him? And
why can’t he read his own writing? Asking myself these questions, I found that
they led to a bigger question: what role does “education” play in our life? It is
a difficult question. In order to find out the answer, paradoxically, it is a useful
to imagine the circumstances faced by children “without education.” The Oxford dictionary
defines education as “the process of receiving or giving systematic
instruction, especially at a school or university.” Therefore, we can say
that someone “without education” has never learned and been taught in a systematic
way.

Before entering
UPEACE, I was engaged in the educational world as a teacher. I have three
teacher licenses, and am able to teach in elementary schools, deaf schools, and
specials school for mental retardation and I have teaching experiences at all three
in Japan. Moreover, I participated in volunteer activities as a special school
teacher in three other states: Mongolia, Zambia, and Taiwan. Now, I will
explain a case in Mongolia of a child “without education.”

A general
outline of education system in Mongolia

From 2003 to
2005, I lived in Ulan Bator, the capital city of Mongolia. According to UNICEF,
the enrollment rate of primary school-age children from 2000 to 2004 was 78% for
boys and 80% for girls.[1]
According to an educational law, children enter primary school at seven or
eight years old. A term of primary education is four years, secondary education
also four years, high school three years and four years university. The whole
system is integrated from primary school to high school. In Ulan Bator, more
than 60 integrated schools exist. In recent years, because of the social and
economic inequality between the city and the country side, an increasing number
of migrants have led to shortages of school facilities in Ulan Bator. Although
these shortages present a serious challenge, it could be easily overcome by
dividing class schedules into three teaching periods: morning session,
afternoon session and evening session, a technique which many other school
systems have effectively used under similar circumstances.[2] 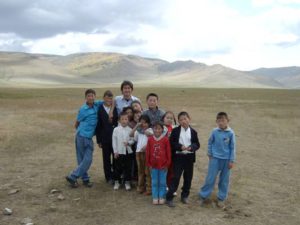 During my two
years in Mongolia, I worked in a special school named No.63 special school. It is
located in a slum area of a suburb of Ulan Bator. This special school is for
the children living with poverty and mild mental retardation. I took charge of a
first grade class with a local teacher for one year, in 2004. There were around
13 children attending my class, ranging from 8 to 19 years old, all studying in
the same classroom. There are two reasons why the ages of the Children are so
different. First, the educational law does not have compelling force; therefore,
parents do not need to take the responsibility for the school attendance of
their children. Second, there are a very few special classes for children with
mild mental retardation in local provinces. Before entering the regular elementary
school, children are required to attend preparatory class for three months in
order to be checked with their learning ability. If some learning problem is
found, the school has the ability to refuse his/her entrance. Therefore, even students
who grew up in local provinces and had a little lerning difficulty had no
chance to study in a school. For these reasons, some of my students could not
enter school at their proper entrance age.

Children are
able to write but not to read

The first time I
saw the abnormal literacy levels among my students, I guessed they had dyslexia.
This is because they could speak almost same as the other local students; however,
their reading abilities were lower than the average. After teaching them for a
month, however, I found that they were not dyslexic at all, and had possibility
to read.

According to guidebook
of mathematics for mentally retarded children, there are three aspects of a
given number: object, name, and figure.[3]
In the case of number “2” for example, the “object” means the item with two (two
circles are “00”), the “name” means the sound of “two” and the letters which
spell “two,” and the “figure” refers to the symbol “2”. To understand the full meaning
of the number, we should comprehend all of three concepts and combine them, as
shown below.

I adopted this
theory into language class, where the three concepts correspond with “meaning”,
“letter”, and “sound”. I found that my students already knew two of the aspects,
meaning and sound, and combination of the two. However, they had difficulty in combining
the concept of “letter” with the other two. Therefore, they can write but not
read.

After finding
out the problem of their reading, the other teacher and I focused on teaching the
combination among the three. We used the teaching strategies developed
originally for deaf education. This strategy starts with teaching nouns,
especially the names of common items. Nouns correspond easily with the three
concepts because all people use same noun for the same item: for example “pen”,
if I show you a pen and ask the name, all of you answer the name of “pen”. On the
contrary, adjectives are much more complicated to teach because the usage of it
depends on speaker’s feeling: for example “delicious”, even though people eat the
same food, some people say “delicious” the other not. For this reason, we started
to teach the names of body parts. After that, we began to teach the students
verbs and adjectives, and finally, grammar. After one year, they managed to read
short sentences, much to the surprise and delight of their families and friends.

This experience
had a profound impact on my thinking about education. I realize now that
education is a bridge to connect our ability with abstract concepts, which people
have accumulated historically. Building on the systematic lessons of our predecessors,
we have gained remarkable insight into the atom, the solar system, and much of
the world between. Education plays an essential roll, allowing us how access
the wonder of human wisdom. However, there are not only positive wisdoms but
also negative wisdoms, including the arts of killing and war. Our nuclear research,
for example, has brought humanity both the promise of medical advances in
cancer treatments and the horror of the nuclear bomb. Education must be
respected for the extraordinarily powerful tool it is, and we, as educators,
must be careful not to misuse it.

Bio: Kenji Tajima is a masters degree candidate in the International Peace Studies Dual Campus Programme at the University for Peace. He has four years teaching experience in four countries and is a dedicated peace educator.