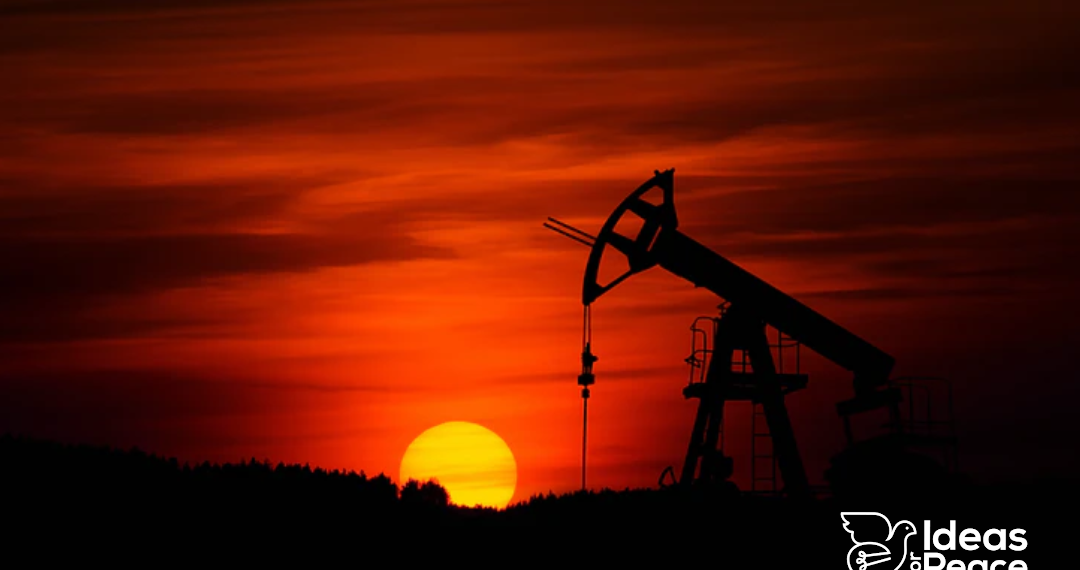 The Venezuelan conflict is not about ideology, is about democracy, oil, and power

It is not about ideology

“I question where are the flags of the Social Democracy and Social Christianism parties and how can they be against this Bolivarian revolution” (Rafael Ramirez, 2014)

Due to the dichotomy between “left” and “right” and considering that Hugo Chavez has become a symbol of the Latin American left, it is easy to assume that the conflict in Venezuela is ideological. A right-wing puppet of the United States against a communist dictatorship is a popular caricature of the Venezuelan conflict. However, this is just a caricature that allows us to see that the opposition and the government are similar in their political practice and ideology.

In a televised encounter between the leaders of the government and the opposition, Rafael Ramirez, a key figure in the economic planning of Hugo Chavez’s government, cites the many achievements of Chavismo, as the reduction by half of the percentage of hunger or undernourished population in the country, taking as a baseline the year 1990 (FAO,2013); and implying that it was shameful for the social democratic and the social Christianism political parties to oppose the revolution.

Ramirez was referring to AD and COPEI, respectively, the former pillars of bipartisan democracy. Back in the 70s, those parties were in power and the oil prices were on the rise; and, since Venezuela was a major oil producer, so was the income of the country. This blooming economic growth, allowed the democratic governments to implement many social programs, public education, free health care, and the nationalization of the oil industry. How can those political parties that favored such policies be right-wing and oppose the revolution? The answer is that they do not; the social programs are not the issue, the complaints from the opposition come from different roots. Even the new parties from the opposition that gained access to local governments had implemented social policies, and many of them are part of the Socialist International, which means that they cannot be defined exactly as the ring wing.

The commitment to social programs is not unique in the political arena. The focus on public discourse and policies like corporate social responsibility has resulted in the fact that even private enterprises become involved in social programs, such as the Alcatraz Project from the Rum company Santa Teresa in Venezuela. Also, Empresas Polar, one of the country’s most important business conglomerates, has established its commitment to social causes and sustainable development. Even if companies may not fully embrace these principles, the fact that they need to show that they do is a showcase of how much these ideas permeate Venezuelan society.

Social development and the end of inequality can become the center of an agreement in Venezuela.  Especially, when in the status quo the collapse of the economy made the country much poorer and brought misery to the citizens. However, it can be said that the power struggle of the elites is the source of the conflict and the country’s welfare is irrelevant, resulting in a cynical view of the crisis.  Even if the main parties involved are just for the power, these elements can lead to finding meeting points among the civilian population, the reconstruction of the social tissue, and organizing to pressure the elites for a conflict transformation.

It is about oil and elections

In the 70s, the high oil prices led to a booming economy that sustained social democracy (Lucca, 2016). This situation made the guerrilla quite ineffective not only in a military aspect since oil money could buy high military technology; also, people whose quality of life was improving were unlikely to join a rebellion. But nothing lasts forever, especially high oil prices.

In the eighties and nineties, the prices dropped. The government became broke and indebted, the economic crisis reflected negatively in the quality of life of the Venezuelans, and they became angry at the government. This paved the way for an outsider, Hugo Chavez, to win the next presidential elections on an anti-system platform, whose main proposal was to change the constitution towards a revolution.

Chavez’s early years were unstable, the conflict with the oil company brought his popularity to a historic low (Gil Yepez, 2012). Luckily for him, the 2000s experienced a massive rise in oil prices. With this new wealthy state, Chavez increased social expenditure via numerous social programs called “misiones”.  As a result, his popularity skyrocketed and allowed him to win all subsequent elections (Gil Yepez, 2012).

The opposition claimed, numerous times, that the elections were a hoax, so it called voters to abstain from the Assembly elections of 2005.  In Venezuela, the National Assembly is a one-house parliamentary system that has a 2/3 majority in it, has control of the entire legislative branch, and can appoint the authorities of the other branches: for example, the Supreme Court of Justice and the National Electoral Council.

Back then, when the opposition asked their voters to boycott the parliamentary elections, and the Chavismo won all seats in the Assembly, Chavistas appointed the heads of many of the country’s most important institutions (Lucca, 2016). That gave Chavismo total control of all major institutions in the State. Ten years later the opposition won the majority in the parliamentary elections. One week before the inauguration of the new national assembly, the outgoing one renewed all the previously appointed powers.

A decision from the National Electoral Council decreed that in three localities the electoral process should be repeated, just the right number so that the opposition would not have the two-thirds needed to change the other powers. The new assembly refused to accept this decision, the Supreme Court, controlled by Chavistas, invalided the National Assembly and the Chavista deputies abstained from participating in it (BBC, 2016) As the National Assembly is supposed to be an institution where representatives of the different regions of the country dialogue, discuss and find answers to the country’s problems, it did not happen. Such a power gap makes negotiation unlikely. There can be no dialogue with only one of the parties. Since its creation more than 20 years ago, that national assembly has failed in its purpose.

On the economic side, as said, nothing lasts forever.  After an average price of US $45 per barrel, in 2012 the oil prices went up to their historic high at US 109 per barrel. Then, in 2016, it descended to $40.76 (Organization of the Petroleum Exporting Countries [OPEC], 2021). Added to the decrease in prices, Venezuelan oil production has contracted by more than 500 million barrels per day since 2016 (Organization of the Petroleum Exporting Countries [OPEC], 2018). Furthermore, from 2011 to 2018, the percentage of oil-related export revenues was greater than ninety percent (Venezuelan Central Bank [VCB], 2021). All these facts mean a mono-exporting economy that produces less and less of its product and, on top of that, prices fall to a point that can only lead to an economic collapse.

According to the IMF (n.d.) data, the third biggest inflation in the world is in Suriname with 51 percent, the second is in Sudan with 129.7 percent and in the first place is Venezuela with 6.500 percent. This situation makes economic planning almost impossible. Manifested consequences can be seen in the loss of income of the Venezuelan population. The minimum wage has dropped to one single figure that equals around 2 US dollars per month (Gaceta Oficial 6532, 2020). Also, in 2019, the real GDP growth was -35% (International Monetary Fund, 2021). The Venezuelan economy has been shrinking at an accelerated pace for some time now and with it the resources of the state and the society, evidence of how poorer the country is becoming.

In the meantime, the tensions between the legislative branch and the other branches of the government would continue to increase to a level where the National Assembly stopped recognizing Nicolás Maduro as President and declared Juan Guaidó, the President of the Assembly, as Interim President of Venezuela (BBC, 2019). After those events, the repression from the government intensified as well as the protests from the opposition. The US, which has been an ally of the opposition, took a more active role by applying economic sanctions to the country and stopped buying oil from it. On the other hand, Maduro has been the object of assassination attempts as, for instance, a drone filled with explosives came close to him during a public appearance, in a rebellion led by a member of the police and a group of mercenaries who arrived in the country to depose him and claim the US bounty on him.

There are parallels between past political crises and the current one, all motivated by the economic crisis caused by oil dependency. Moises Naím and Ramón Piñango (1984), in their iconic text “El caso Venezuela: una ilusión de armonía” explained that while oil prices are high and the government has enough resources to cover up the conflicts, the solutions to every problem rely on the vast amount of oil wealth; making the Venezuelan institutions unprepared to handle the societal tensions. On the contrary, when oil is scarce, the government either ignores social tensions or tries to suppress them, which comes with the escalation of violence. Decades after the publication of Naim and Piñango, this phenomenon is still occurring.

Due to the economic collapse, millions of Venezuelans have fled their homes and went to other countries to seek better conditions of life. The current number of migrants and refugees is estimated to be around 5,400 million people, with 800,000 seeking asylum. (The UN Refugee agency [UNHRC], 2020). The sheer number poses significant challenges to the countries around the region, especially Colombia that has received more than two million. This situation exemplifies the consequences of the economic situation on the population, which has been exacerbated by the political conflict.

Oil can create inequity in power. The actor/administrator has enough to not need the rest, so the rest of the actors are not included in the government plans. Institutions take the form of all or nothing, which is usually the one who has access to the oil wealth. Then, when circumstances change and the oil abundance ceases, the institutions are not prepared to process the conflicts previously covered by the wealth. The country enters chaos and does not have the mechanisms to get out of it. Reforming institutions to make them more equitable is a step towards building peace in Venezuela.

While completing his bachelor’s degree in Liberal Studies, Diego Bautista was deeply engaged in political activism. His work as social researcher further developed his interest in Latin America to pursue its development. Soon after, the escalation of violence in Venezuela prompted him to go to Costa Rica to start a master’s degree in Conflict Resolution, Peace and Development. There he found that the conflict in his country, which seemed so immutable to him, was no different from many situations that had undergone a transformation. Peace is always an option.